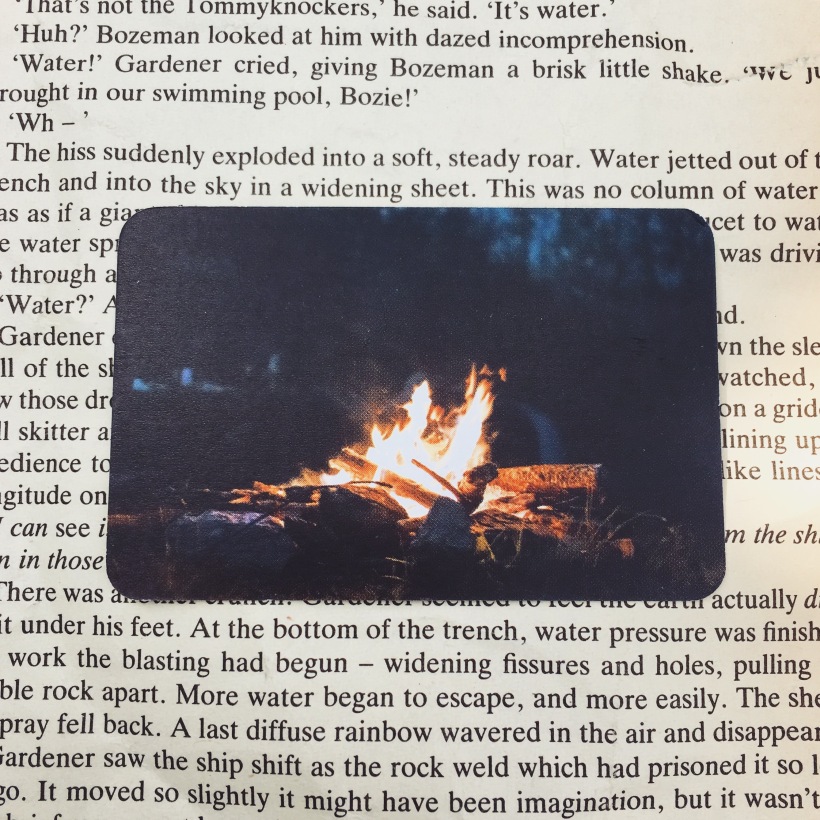 When she was a little girl, her mother told her stories of dragons who lay hidden in deep caves guarding mounds of treasure. One ordinary Tuesday, she set off to find one.

It did not take long, for her mother had taught her well what to look for, and she soon found a crack in a cliff, scoured at the edge with claw marks, which most people, being unthinking sorts, would mistake for a natural formation. She crawled through the rough and narrow passage winding into the rock (dragons, with all their magic, can fit though surprisingly small spaces). Upon reaching the lair, she sought the dragon’s head, resplendent in emerald scales, tapped him awake on the snout and met his fiery gaze with hers.

She performed her best and most gracious curtsey, dipped her head, and declared herself his firm friend and lifelong ally. Dragons are ancient and wise creatures and he regarded her only momentarily before acknowledging her to be correct (it is widely known that precocious children are indeed the very best friends to have, particularly if you are a dragon).

They lived long and happy in each other’s company and he taught her the magic of the flames – a greater treasure by far than that which he hoarded in his cave.

As she grew and had a family of her own, she shared her mother’s stories with her children and grandchildren, and every November they would marvel at her ability to rouse a leaping bonfire from even the dampest kindling, and the way in which sparks would settle in her hair: burning like fireflies but never catching.

Whilst the children danced like flint strikes around her, she would sink into the warmth of her own embers and smile at the golden eye which gazed, unseen by the rest, out of the flames.

“You’re a storyteller. Dream up something wild and improbable,” she pleaded. “Something beautiful and full of monsters.”

Strange The Dreamer by Laini Taylor

Inspired by Erin Morgenstern’s Flax-Golden Tales, I have decided to embark on my own creative writing blog series, “Wild & Improbable Tales”, as a way to write more freely and more frequently. At least once a week, I will choose a card at random from The School Of Life‘s ‘Small Pleasures’ box and use the image and/or writing on the back to inspire a short piece of creative writing. I’d love to hear your thoughts in the comments.

“She had never been aware that she was afraid, that she feared the world’s vastness and diversity, it’s violence too.” - The Girl Who Reads On The Metro, Christine Féret-Fleury
Never could resist a book about books…
Holiday reading stack! That’s enough for a week, right? I’ll take my kindle as well, just in case…😝
Happy holidays to me! Had a real brain fog day today so grateful to know I’ve got a lovely chilled week ahead with my beloved, the pup and a big stack of books!
“I’m trying to speak - to write - the truth. I’m trying to be clear. I’m not interested in being fancy, or even original. Clarity and truth will be plenty, if I can only achieve them.” - The Parable of the Sower, Octavia E Butler
“We are coming apart. We are a rope, breaking, a single strand at a time.”
In 2020, I treated myself to the Whitworth backpack by @kulabags. I’d been looking for a sustainably made backpack that didn’t cost the earth and still looked stylish. When I first came across Kula I was a little sceptical. Backpacks made of paper?! I wasn’t convinced they would be that durable. But they we’re super affordable and I loved the look of them so I figured I’d give them a go.
Over the last few years, my professional life has changed dramatically. Since the age of 18, I have trained and worked in various roles to support young people. That was the career path I chose. I worked incredibly hard at it. And I loved it. Until I didn’t. Until it took more from me than I could give and the stress and exhaustion overtook the reward and passion. So I made a change. It was a leap into the unknown. The only things that made me feel secure in that choice were a)knowing I was going to be working with brilliant people and b) knowing it would give me the opportunity to write. I had nothing else.
The silver lining of constantly waking up super early for no reason? Lots of time to read and snuggle our pup.❤️
Follow Thrive In Chaos on WordPress.com